Francisco Prior and Carlos San José give us an interview in which we unravel the new challenges and opportunities that publishing houses are facing.

The School 2.0 project has been in progress for a number of years now in Spain. How do you see the current situation?

Francisco– At the moment, ICT is a reality in schools. The interactive whiteboard, for example, is present in almost 90% of schools. As for the rest of the ICT, it is well implemented in the education service. The main difficulty lies in the use of ICT as an academic or learning tool because its exact role within the model for education hasn’t been clearly defined yet.

Carlos– Well, there are different types of models and not all teachers have been properly trained to make the most of what ICTs actually offers.

Francisco– One major handicap is that there is no study-based literature confirming that the use of ICT improves the education system.

Francisco Prior and Carlos San José de Anaya in their interview with Netex.

What new challenges do publishing houses have to face?

Francisco– The first challenge is to transform your own structure, your internal functioning. Publishing has a long tradition; we can say it’s a very mature system. So the greatest difficulty lies in continuing to work on paper. Everybody accepts that you have to evolve. The issue here is who decides, when and how.

Carlos – Yes, we’re moving from one model where the product is a book, to another where specifications are not yet clearly defined. This means a lot of flexibility is needed in order to provide content in formats which are constantly changing. That is a real challenge…

How is Anaya positioned in Spain and Latin America?

Francisco– Grupo Anaya is a well-established leader in the education system in Spain. That’s why we’re working on defining the model and on configuration for digital content. A model that doesn’t have to coincide with any other. In Latin America, specifically in Mexico and Argentina, it is the Hachette via Larousse and Grupo Anaya, who is responsible for developing this. Our response is all about being up to date with technology and its applications. I think the biggest difficulty lies in defining the model. We have our own model but it doesn’t always coincide with social or technological demands.

How would you assess the functioning or the teachers’ acceptance of the ICT resources Anaya is currently providing? I mean GRETA (Spanish abbreviation for “educational and technological learning resources manager”), digital books, resources and interactive activities (anayaeducacion.es).

Carlos – There’s a lot of interest in all that. The problem is that implementation or active start-up doesn’t rely solely on interest. It depends on the economic situation, on administration plans… This is what I would call an “eternal pilot” situation. We haven’t seen any proposals come through except for in Catalonia, which offered the most solid pilot. At this point, we should actually be at a different stage, but what with launching the technological development of the digital book, the digital resources, the virtual learning environment, online training, space for teachers, different websites for students… You set all this in motion for when the situation becomes more stable and learning tools and products are available.

Francisco– I read, not long ago, that we live in a society with an information overload. And I think that we live in an education system with an ideas overload. You talk about a given device and by the time publishers start working on its preparation, another device crops up. When you’re trying to adapt to the new device, a tool appears that overrides it. I believe that an education system needs time and shouldn’t necessarily keep up with the pace of technology. Education is a mature concept in society. At this moment, in Spanish society, not European society nor American, technology is paving the way for the educational model. And we, as educators and content creators, think this is a huge mistake. Nowadays, there is enough technology and enough tools for teachers to establish a learning model and to create content with it. Because an education system needs time. Education can’t be limited by devices. Learning has always been a wider concept, more open, more generic and, ultimately, what we’re doing is reducing all that to a 7-inch screen. I think that’s where the problem lies. In Spain, I insist, there’s a model that doesn’t exist in other countries. In France, the education model and learning tools are adapted. Here, it’s not logical to be talking about, say, HTML5 or iPads when we can’t even see their functionalities because they’re still being defined. First, define the features, get hold of the tools and then let’s start working on them. It’s like we’re all running around aimlessly like the story of the guy who says: “Where are you going?” and the other guy answers “I don’t know, but as fast as possible!” That’s the feeling I’ve got…

After taking a closer look at some of the tools, could you let us know about any novelties Anaya is working on? Which of the areas mentioned before are of real interest to Anaya? Going for a more comprehensive environment, a better development of digital books or interactive activities, interactive whiteboards… Something that bears a resemblance to reality.

Francisco– I think that nowadays, the most important technological achievement is the interactive whiteboard.

Carlos – Its success can be compared to that of the word processor. No one who has used a word processor has ever gone back to using a typewriter again. The interactive whiteboard has been well received in classrooms because it has adapted really well to what teachers feel comfortable with. The digital book is also very important together with external interactive resources. The book is used for transmitting knowledge, and the exercises and activities are used for assessment. All of that within a virtual learning environment. And this is what could be defined as the digital heir of the book, as the main learning resource in classrooms.

Francisco– If this were complemented with minimal support on paper, it would be the ideal model. Up to Year 5 in Primary Education, pupils need to develop certain learning skills. Writing or maths can’t be substituted. Another thing is the use of technology as well. The model that can’t be changed is the social model in which schools communicate with families, and teachers assess and exert control over students. We’re moving towards a model of more strict and structured content. There’s going to be a huge evolution in the creation of resources, and that’s where publishing houses will make a greater contribution. For example, as far as the level of difficulty is concerned, a teacher has no time to generate a sequencing of resources in the classroom and it’s not their job to, either. Also, if we’re talking about new content, we’re not talking about reinventing the French Revolution. Unless you come across a new document saying Marie Antoinette was not guillotined and there’s no “fraternité”… [laughs]. But what you might come across is a group of activities or resources which will help the teacher to explain the repercussion of the French Revolution on today’s society.

I think video has been taken for granted, and is still being relegated to Fridays right before lunchtime. It makes me think they’re still using it like they used to back in the day. Well, when I was at school it was slides, but it was still that end-of-the-day activity, an excuse to get out earlier… What I do think is that there’s no going back when it comes to the use of new, more interactive resources. 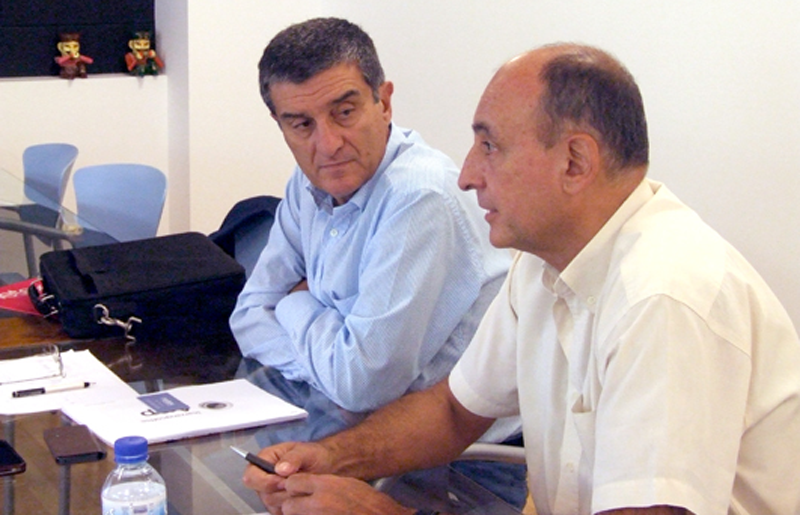 Francisco Prior and Carlos San José from Anaya talk about the new challenges and opportunities which publishing houses are facing.

You have seen Netex solutions for educational publishing houses. What do you think of them?

Francisco– Personally, I think it’s a nice surprise to find companies developing a solid project, in terms of tools and digital creation, understanding exactly where these elements should be. They are more and more aware of the needs of the publishing world. And the future lies there, in the hands of companies that render services to big groups.

Carlos – When someone says that everyone has to do what they do best, it refers precisely to that collaboration between companies. We all know there are companies that share this point of view and can complement each other very well.

Francisco– We’ve been in contact with foreign multinationals, and I’m talking about the publishing sector, like Google or Apple, but there aren’t that many that know how the education process actually works. In comparison, I think that, within the Spanish publishing business, Netex offers the most real and relevant possibilities. Even technologically speaking, I think that it’s a very competitive company for the education publishing market. Maybe the problem is that we’re in a country that doesn’t have a very good reputation, but they really have no reason to envy any other company because they create tools which are more generic, open and visual than other bigger companies do. They might not be inventing the wheel, but they do add a very solid approach to their ideas.

Carlos – For example, your tool learningMaker. We all know that there are applications for creating resources, any publisher knows they exist. But when you’re given a friendly solution, focused on your environment and you see that it’s functional… That’s what I meant when I was talking about the importance of being familiar with the world of education.

Innovative Learning Technologies: We apply new technologies to the training world. We want to break all the barriers with accessible and simple solutions to make digital training part of the natural learning process of our users.

Ed Monk & Will Storr: reflections on storytelling and learning at i-love learning 2017